BOOK A VIDEO CALL WITH THE SELLER

We are here for you

Own a property at one of the best Bratislava addresses

Bratislava has received new contours in recent years. Several new city-building projects have gradually been added to the capital – and are turning Bratislava into a true metropolis. Thanks to the work of foreign as well as local architectural studios, downtown has come to life – with the largest dominants including the new bus station building which combines an international bus terminal, a shopping centre and a market. Other projects involving major European and international architectural studios are already gradually being unveiled. For instance – can look forward to the new look of Stone Square (Kamenné námestie) and Grössling Spa – an iconic monument, the restoration of which will be implemented by the renowned Italian OPPS Architettura studio from Florence. And Vydrica is one of the localities that wrote the rich history of our capital.

Peter Gero, who in the role of the chief architect of the city of Hamburg contributed to the current appearance of the local HafenCity, and the London Marko & Placemakers urban studio – who are not only significant names in the world of architecture, but also Bratislavans through and through – will play a role in the new look of the Bratislava Castle outskirts with emotion and respect for tradition. Under their leadership, a new pedestrian zone in Bratislava will be created below the castle grounds, and near the Danube – which is not only the ideal combination of tradition and modern architecture, but also an excellent investment opportunity.

Unique living and a place to do business

Vydrica is located in a unique place, so not only living, but also doing business and investing in real estate under the castle hill is an opportunity that may never be repeated. There will be fewer than 400 apartments available throughout the project, 120 of which have already found their owners. Buyers are particularly attracted to the modern architecture, high-quality standards, lively streets, varied gastronomic and commercial establishments, and the extension of the historic promenade which will be an extension of the Bratislava pedestrian zone from Hviezdoslav Square – creating an authentic, lively city atmosphere in Vydrica and bringing new visitors to the vibrant heart of the castle area.

The ideal time to buy, and an excellent investment opportunity

The interest in real estate was not impacted by the corona crisis, and Slovaks in particular want to become the inhabitants of the new area. This is represented by a wide range of customers – from top managers and private company owners to ordinary people looking for housing with a special atmosphere, and also Slovaks living abroad who want to invest in real estate in Bratislava. However, due to the situation, we had to adapt to the newly created conditions and the closure of sales outlets. “We have therefore launched the option of online meetings for our clients. This alternative has taken hold so much that many people started using it even after the measures were relaxed. Today, people from abroad who still do not have the opportunity to come to Slovakia communicate with us in this way.” explains Juraj Ťahún, Vydrica Sales Director.
The constant interest is also supported by rising inflation in recent months – as buying real estate is one of the most stable investments. “It’s not only that. The number of flats in Vydrica is limited. Many people may perceive the Vydrica project as large, but in reality it is a combination of housing, retail and offices. The whole project will provide only about 380 flats.” adds Juraj Ťahún whilst also emphasising the historical context of this exceptional location.

The limited offer, unique location, historical context, and the high standard of the project therefore make the purchase of an apartment or commercial space in Vydrica a unique and stable investment with high added value. A combination of history and modern architecture

Bratislava was formed over a long period of time, and Vydrica has always been an integral part of it which can boast a true history. From time immemorial, this once small settlement behind the Vydrická Gate additionally served an official state function – the gateway through which the monarch came to Pressburg, where he was greeted by representatives of the town council and handed the Key to the City. Until the point when construction of the SNP Bridge intervened in its story, Vydrica had been an iconic suburb for several centuries and eventually a historical part of the city. In the new project, hence it symbolizes the connection between the past and the future in the most valuable space beneath the castle, touching the Danube.

Vydrica – which will grow in this place in the coming years – will bring a timeless concept of urban life thanks to its unique location and combination of history with modern housing solutions. The proposed streets of the project partially reflect the routes of the original streets that formed this area in the past, and in its construction we have worked with materials such as stone, brick, and noble plastering. The restored location beneath the castle will move the focus of active life in the centre where it has always been. The real centre of the city will return to its original position and the completion of the castle will fully rejuvenate the symbolism of the castle as a central point of Bratislava.

The historical monuments that we will be restored and made accessible again within Vydrica are not only the fragments of the Kempelen water supply system and the ice pits. The dominant feature of the whole project will be what is a national cultural monument: the Water Tower – the oldest standing monument in our capital city – which is to be restored and integrated into the public space. The oldest reports of the building – which served as a toll booth guarding the ford across the Danube – date back to the 11th century. Although its above-ground masonry is medieval, recent archaeological finds from the Celtic-Roman period on the castle hill and within the castle grounds provide strong arguments for reconsidering the dating of the oldest part of the Water Tower. We will spend almost €1.5 million on the revitalization of the tower and its surroundings.

The ecological concept of Vydrica

In addition to the emphasis on preserving the cultural and historical heritage, the concept of public greenery plays an important role in Vydrica. The square near the Water Tower will take the character of an open space with green and paved areas, and in the streets with apartment buildings there will be park plant cultivation, shrubs and mature trees. A significant part of this concept is additionally formed by green roofs which contribute to the stabilization of the local microclimate and prevent the overheating of buildings, whilst also serving as water retention measures for rainwater. 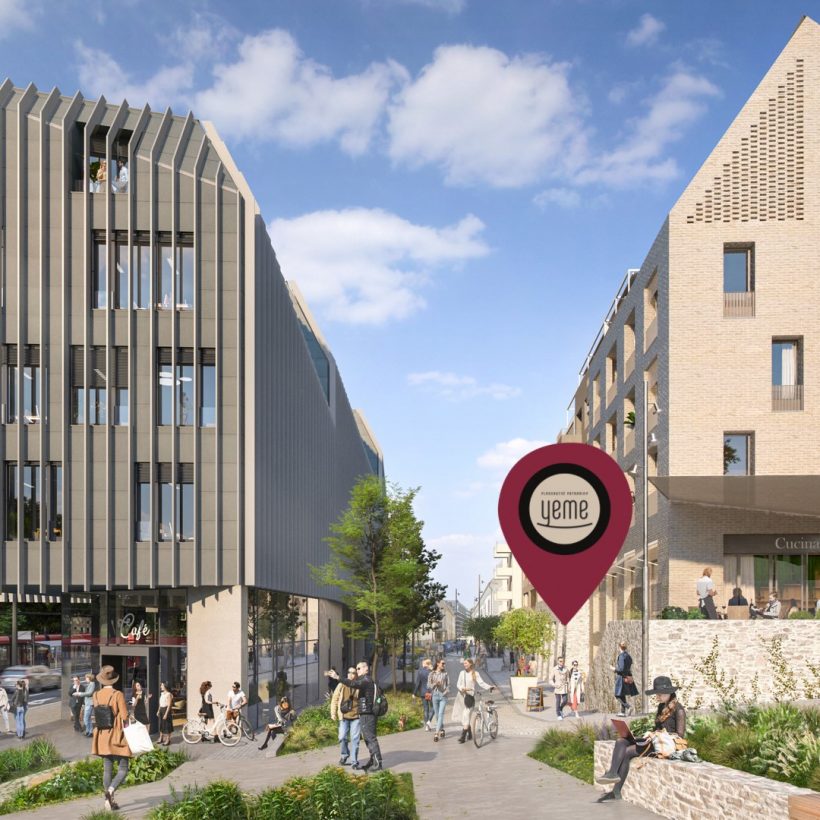 Name of the first retail tenant at Vydrica revealed 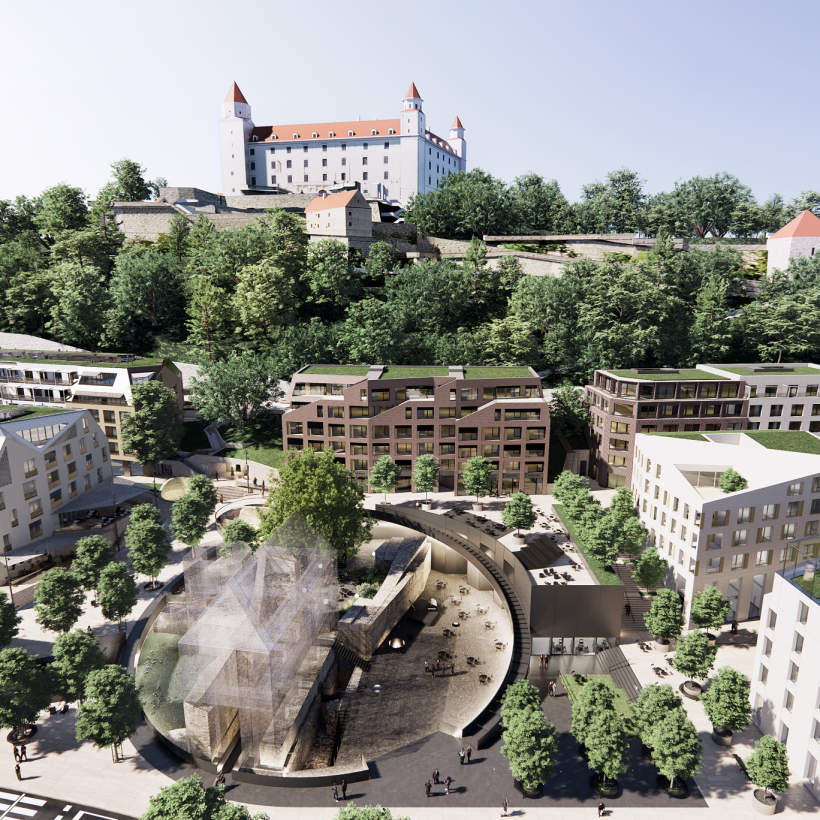 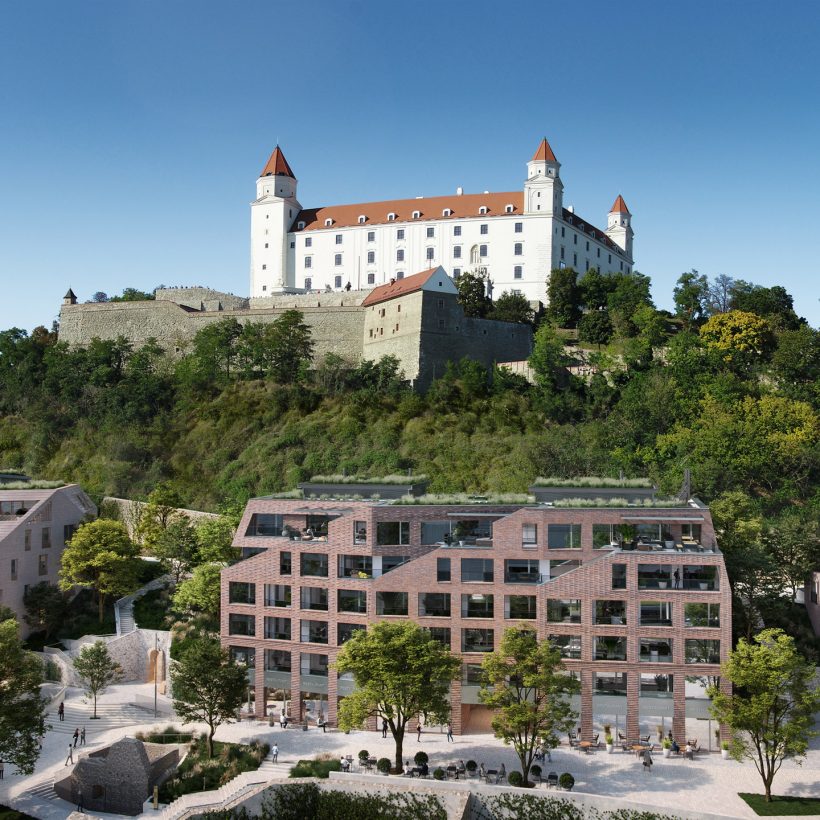 Become a part of the new
Vydrica story.

We use cookies on our website to give you the most relevant experience by remembering your preferences and repeat visits. By clicking “Accept”, you consent to the use of ALL the cookies. However you may visit Cookie Settings to provide a controlled consent.
Manage consentAccept
Manage consent

This website uses cookies to improve your experience while you navigate through the website. Out of these cookies, the cookies that are categorized as necessary are stored on your browser as they are essential for the working of basic functionalities of the website. We also use third-party cookies that help us analyze and understand how you use this website. These cookies will be stored in your browser only with your consent. You also have the option to opt-out of these cookies. But opting out of some of these cookies may have an effect on your browsing experience.
Necessary Always Enabled
Necessary cookies are absolutely essential for the website to function properly. These cookies ensure basic functionalities and security features of the website, anonymously.
Analytics
Analytical cookies are used to understand how visitors interact with the website. These cookies help provide information on metrics the number of visitors, bounce rate, traffic source, etc.
Functional
Functional cookies help to perform certain functionalities like sharing the content of the website on social media platforms, collect feedbacks, and other third-party features.
Advertisement
Advertisement cookies are used to provide visitors with relevant ads and marketing campaigns. These cookies track visitors across websites and collect information to provide customized ads.
Others
Other uncategorized cookies are those that are being analyzed and have not been classified into a category as yet.
Performance
Performance cookies are used to understand and analyze the key performance indexes of the website which helps in delivering a better user experience for the visitors.
Save & Accept
Powered by